Getting hands-on with the new MacBook Air (late-2010)

I have just finished a relationship. Not a normal kind of relationship you understand, this one was with a laptop. A rather special laptop. Last new year a friend showed off his MacBook Air to me and I was smitten ever since. So when Apple announced their latest incarnation of the Air I leapt at the chance to get one for myself.

I have been a Microsoft person since the days of MS-DOS and Windows 3.1 but I have acquired a not inconsiderable number of hours on Macs over the last year (at least for a Windows person) and unbeknownst to me they have been getting under my skin. So it was with a fluttering heart that I hit the ‘buy’ button at the online Apple store  two days after the announcement of the new Air and I became £1500 lighter of pocket, for a time.

I followed the progress of my order excitedly every day. I went for the absolute maximum specification you can buy – 2GHz, 4GB RAM, 256GB SSD – which you cannot get in the stuffy Apple stores, so once it had been built I followed it from pillar to post as it travelled from China to Kazakhstan, Poland, Germany, then finally into the UK and to my work place.

In the presence of a trusted colleague I opened the box and turned it on for the first time. First impressions for the both of us (apart from “wow that’s so thin”) was something no-one else had mentioned in reviews – “oh my god, that’s fast”. After going through the install process I had done a boot-speed test and it booted in under 10 seconds. Truly astonishing. I’ve tested the fastest of the MacBooks Pro in the Apple stores and they take at least 30 seconds, so for a middle of the range spec’d laptop this is very impressive. It’s likely the SSDs in the Airs are seriously good, which goes some way to explaining their huge cost I suppose.

And so I settled down to getting used to my new MacBook Air. I copied across my documents, installed Office for Mac 2011, got Office Communicator working and Outlook syncing. All was well. I even installed Server 2008 R2 in a virtual machine which work a lot better than I expected, and when I discovered that crappily coded Skype didn’t work in MacOS X 10.6.4 I was happily able to run it in the virtual machine instead.

I was looking at 9 hours of battery life (at a snip) with an average of say 5 or 6, and was quickly getting used to being able to whip it out of my bag, open it up and get on the internet in less than 10 seconds, instead of the 5 minutes (!) that I have to wait for my old Windows 7 machine to be ready to actually be used.

I was even playing games on it. EVE Online and Portal worked beautifully on it. I had seen EVE on my friend’s Air and it was awful but this Air had a really rather good graphics card in it so games actually worked. Think about it, a laptop that weighs less than 1.5 kg that can play games really quite well. That’s just not normal.

Then I started to notice something… it was getting very very noisy. When you actually use the Air as a proper computer, to do some Adobe renders or play a game, it gets really really noisy. There’s a little slit hidden in the hinge of the screen and out of there comes all the heat, and there’s plenty of it. 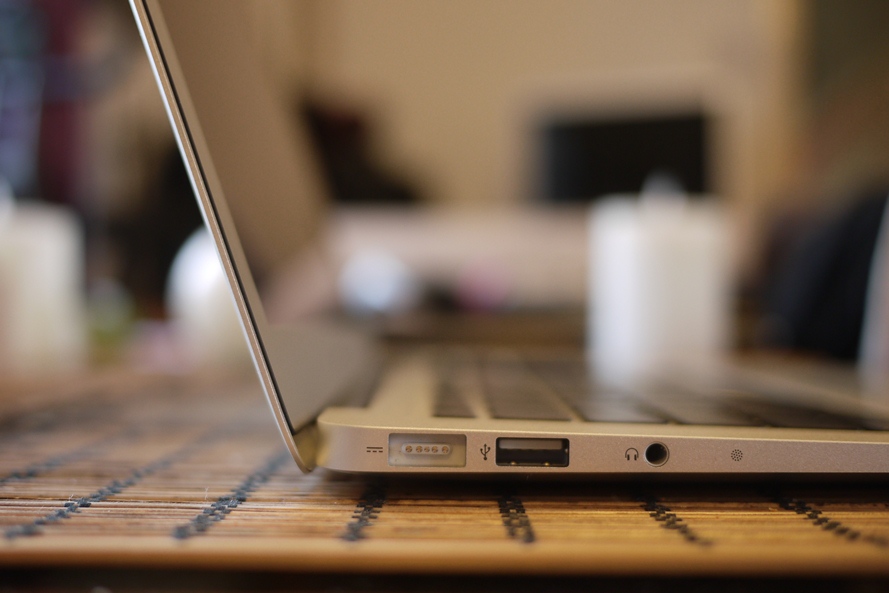 OK so it’s noisy, I can wear headphones when I play a game I thought, fine. A compromise to be privileged enough to have a laptop so small.

Then disaster. It dies. On the 8th day of use the last thing I do is play Portal at lunch time. I finish my game, mute the speakers ready for the next boot up (so the annoying boot-chime is gone) and shut it down. When I return home that evening I get it out of the bag and press the power button. And, nothing. After much diagnosis, and even trying to get the back off it (without success I should add) I give up.
Next day I take it to the Apple Genius guys. Seriously good those guys – you definitely get good support with Apple stuff. They were stumped too, so they wipe the hard-drive for me (at huge effort to them) and I’m ready to refund. I phone up the online billing assistance number and they don’t quibble, I’m entitled to a refund whether it’s faulty or not since it’s less than 14 days since it arrived.

So there we are. I’m back to an annoying Windows 7 laptop that burns my knees and won’t play games very well.

So as things go I was very happy with my Mac Air. It was super light, very easy to use, attractive to look at, had a fantastic screen, and best of all was the most responsive computer I’ve ever used.
My only quibbles are that if it dies you’re at the mercy of the Apple support guys, there’s nothing you can do but hope that they will help you out. It is far too noisy when working hard, and the front edge is a little too sharp.

So in conclusion I think Apple have made a surprisingly good laptop with the new MacBook Air (late-2010). It’s small enough to comfortably stay in your bag on your shoulder at all times, fast enough for almost all uses and thus will have very long legs and will be a good long term investment – albeit a costly one! Unfortunately, it’s just not for me, I need a bit more power for my buck at this cost. Now it has died on me I can’t trust it not to die again, whether it’s a new machine or not. And for £400 less I can buy a 13″ Windows machine with an i5 processor and similar gpu. Sorry Apple, I hardly knew you.

Iconic One Theme | Powered by Wordpress